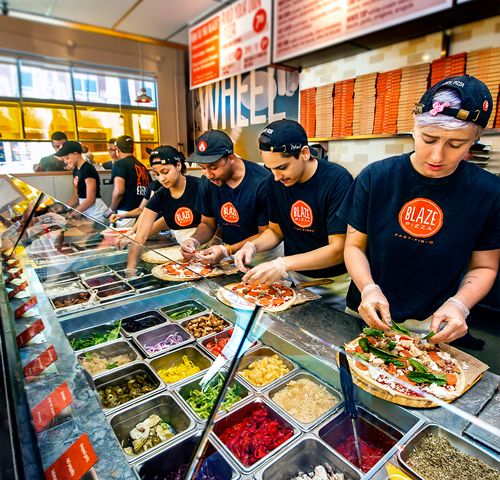 Los Angeles, CA  (RestaurantNews.com)  Blaze Fast Fire’d Pizza, the nation’s leading build-your-own pizza chain, today announced that it will soon be opening its second New Jersey location, in Wayne. The fast-casual concept, known for its chef-driven menu and casually hip restaurants, is scheduled to open in February, in Willowbrook Mall in a 2,800 square foot space located on the doors of the level one main entrance.

Blaze Pizza is a modern day “pizza joint” known for its custom-built artisanal pizzas, freshly made salads, blood orange lemonade and s’more pies. Each restaurant features an interactive assembly-line format that allows guests to customize one of the menu’s signature pizzas or create their own, choosing from a wide selection of fresh, artisanal ingredients – all for under $8. The generously-sized 11-inch pizzas are then sent to a blazing hot open-flame oven – the centerpiece of the restaurant – where dedicated pizzasmiths ensure that the thin-crust pies are fast-fire’d and ready to eat in just 180 seconds. Each restaurant makes its own dough from scratch using a recipe developed by critically-acclaimed Executive Chef Bradford Kent (“The Pizza Whisperer”), which requires a 24-hour fermentation period to produce his signature light-as-air, crisp crust. For pizza fans with specific dietary needs, Blaze Pizza offers gluten-free dough and vegan cheese.

The company’s mantra of making “intelligent choices” goes beyond selecting the best ingredients and serving exceptional pizzas.  Each restaurant is carefully designed to suit its own space, with award-winning architect Ana Henton thoughtfully applying industrial elements and fire-inspired colors to each location – creating a warm, inviting environment that fits within the local neighborhood.  Additionally, Blaze is committed to sustainability and uses eco-friendly packaging and locally sourced ingredients whenever practical.

“Our mission at Blaze is really simple – we’re all about bringing the community a place where guests can connect, create and enjoy great pizza at crazy fast speed,” said Jim Mizes, president & COO of Blaze Pizza. “If you think about it, there hasn’t been a good way to enjoy a made-from-scratch pizza without the wait. Now there is. We believe this will be a game-changer in town.”

New Jersey residents have already been enjoying Blaze Pizza since the Paramus location (65 Route 4 West) opened this past November. A third New Jersey location is set to open in Clark (1255 Rantan Road) this June.

The New Jersey Blaze Pizza locations will be operated by AMPAL Group, a franchise group led by franchisee Amit Patel. 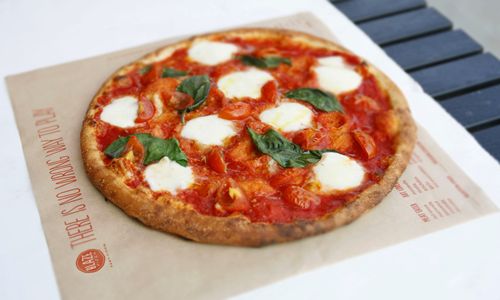 The first Blaze Pizza® restaurant opened on August 6, 2012 in Irvine, CA, and quickly gained attention for its chef-driven recipes and “build-your-own pizza” assembly-line format.  Described by Zagat as “One of 10 Innovative Restaurants in Los Angeles,” Blaze Pizza is developing a cult following as it expands across the U.S. The company currently operates restaurants in 15 states and the District of Columbia, including the major metropolitan areas of Los Angeles, New York, Chicago, San Francisco and Washington D.C.   Founded by Elise and Rick Wetzel (co-founder of Wetzel’s Pretzels), the concept is backed by investors including LeBron James, Maria Shriver, Boston Red Sox co-owner Tom Werner and movie producer John Davis.  For more information, please visit blazepizza.com and facebook.com/blazepizza.