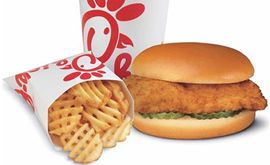 Chick-fil-A said it’s removing high-fructose corn syrup from its white buns and artificial dyes from its sauces and dressings as part of a push to improve its ingredients.

The fast-food chicken chain said the reformulated buns are being tested in about 200 Georgia locations, while the sauces and dressings will be tested starting early next year. It said it also removed a yellow dye from its chicken soup and that the new recipe should be in all restaurants by the end of this month.

It’s also testing a new peanut oil, with hopes of a rollout early next year.

The changes come after blogger Vani Hari wrote a post in 2011 titled “Chick-fil-A or Chemical Fil-A?” on her site, FoodBabe.com.