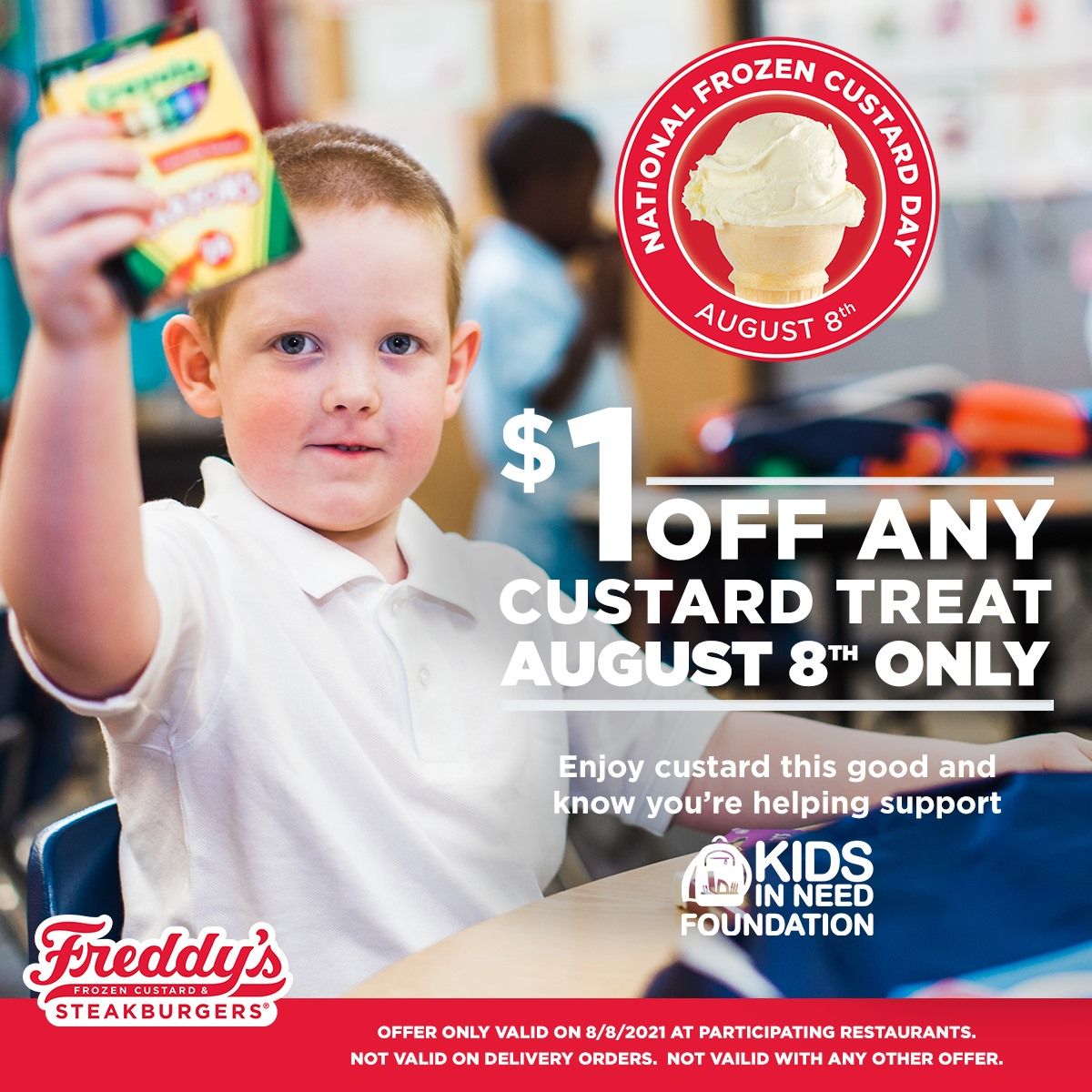 On Aug. 8, locations nationwide will offer a $1 discount on any frozen custard treat and support Kids In Need Foundation

Wichita, KS  (RestaurantNews.com)  Fast-casual restaurant concept, Freddy’s Frozen Custard & Steakburgers®, announced today that it will offer a $1 discount on frozen custard treat purchases at locations nationwide in honor of National Frozen Custard Day on Sunday, Aug. 8.  For the sixth year in a row, Freddy’s will support the Kids In Need Foundation, an organization that believes every child in America deserves equal opportunity and access to a quality education.

“As back-in-school season begins, thanks to the generosity of partners like Freddy’s, we are able to ensure that underserved schools have the resources needed for teachers to teach and learners to learn,” said Corey Gordon, CEO of Kids in Need Foundation. “With the focus this year on having teachers and students return to in-person learning, school supplies and learning tools are critical, particularly in the country’s most under-resourced communities. We are grateful to Freddy’s, a company rooted in family values, as it raises awareness and support for the teachers and students served by our mission.”

Chris Dull, President & CEO for Freddy’s Frozen Custard & Steakburgers, added, “National Frozen Custard Day has become an annual tradition at Freddy’s that gives our Guests a reason to celebrate but also allows our brand to contribute to a cause that directly impacts our local neighborhoods. We’re proud to support Kids In Need Foundation for the sixth year in a row and are eager to continue to help students across the country start the new school year with a full backpack.”

Along with cooked-to-order steakburgers, frozen custard is a staple of the Freddy’s menu. Known for being smoother and richer than ice cream due to a time-tested churning process that minimizes ice crystals and excess air, Freddy’s frozen custard is made using only America’s finest dairy ingredients. Every day in each restaurant, it is churned throughout the day to produce the high-quality, fresh custard treat that made Freddy’s famous in 32 states.

Freddy’s Frozen Custard & Steakburgers® plans to open more than 40 restaurants nationwide throughout 2021. Franchise opportunities remain in areas across the U.S., including the Northeast, Upper Midwest, California, South Florida and large metro areas such as Pittsburgh and many of its surrounding markets. For more information about development opportunities, contact Mary Coots, Director of Franchise Development, at 316-719-7850, or visit www.freddysfranchising.com.

Co-founded in 2002 by Scott Redler and Bill, Randy and Freddy Simon, Freddy’s opened its first location in Wichita, Kansas, offering a unique combination of cooked-to-order Steakburgers seasoned with Freddy’s Famous Steakburger & Fry Seasoning®, Vienna® Beef hot dogs, shoestring fries paired with Freddy’s Famous Fry Sauce® and frozen custard that is freshly churned throughout the day. The brand was acquired by private equity firm Thompson Street Capital Partners in March of 2021. Today, Freddy’s has grown to more than 400 locations that serve 32 states across the nation from California to Pennsylvania, Virginia, down the East Coast states to Florida. Freddy’s has twice been named No. 1 on Forbes Best Franchises to Buy, The 2021 Restaurant Business 10 Fastest Growing Chains in the U.S. List, Entrepreneur’s 2021 Franchise 500 top 100, Franchise Times magazine’s 2020 Fast & Serious top 40 and many other nationwide and local industry awards. For more on Freddy’s, visit the Newsroom and follow us on Facebook, Twitter and Instagram for the latest news.

About Kids In Need Foundation

Kids In Need Foundation (KINF), a nonprofit organization that believes every child in America deserves equal opportunity and access to a quality education, provides the support and tools needed for teachers to teach and learners to learn. By providing essential school supplies, distance learning resources, and other classroom items in high demand, KINF partners with teachers in underserved schools to ensure students are prepared to learn in the classroom. In 2020, through its programs and National Network of Resource Centers, comprised of more than 40 mission-driven organizations nationwide, KINF served an estimated 5 million students, 205,000 teachers, and provided over $70 million in product at no cost to schools or teachers. For more information, visit KINF.org and join us on Facebook, Instagram, LinkedIn, and Twitter: @KidsInNeed.