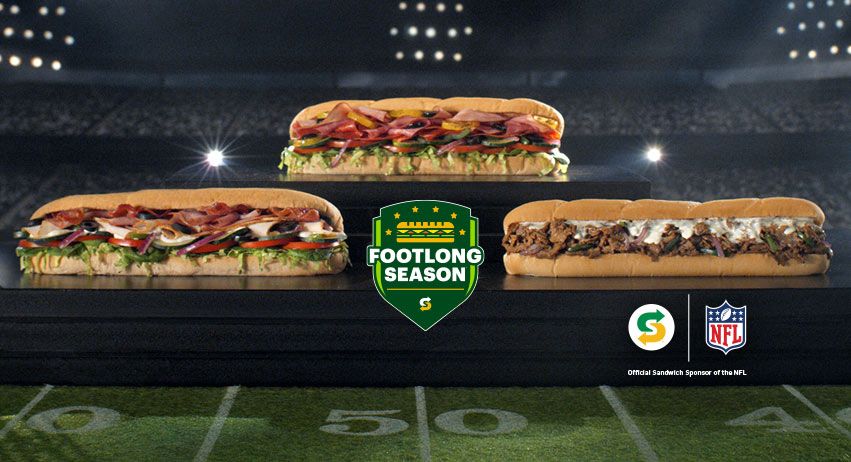 Subway turns Football Season into Footlong Season™ with the help of NFL coaches, players and personalities along with special meal deals

Milford, CT  (RestaurantNews.com)  Subway® restaurants, the world’s largest sandwich chain and new, exclusive Official Sandwich Sponsor of the National Football League (NFL), is adding its own flavor to the game with plans to turn the 2020 football season into “Footlong Season.” Throughout the 2020 NFL Season, and debuting today with a television spot featuring NFL Coach Bill Belichick, fans can make a good call all season long with Subway.

Joining Coach Belichick this season will be NFL star brothers J.J., T.J. and Derek Watt, and NFL Hall of Famer Deion Sanders, for Subway’s new national marketing campaign that will leave fans craving footlong sandwiches while cheering on their team. The star-studded line-up will be featured in television commercials, along with social and digital content that encourages fans to eat fresh® while tailgating or “homegating.”

“In our first play as a proud sponsor of the NFL, we’re pairing our game day favorite Footlongs with America’s favorite sport and intercepting football culture with an elite squad of stars to help turn Football Season into Footlong Season,” said Carrie Walsh, Chief Marketing Officer of Subway. “Entertaining ad creative, unexpected activations and special meal deals are just the start of our blitz to keep fans excited and fully fueled for every NFL game no matter where fans watch football this season. With sandwiches made with freshly baked bread and fresh veggies, Subway will help you make good food choices all season long.”

“When Subway reached out, shared the Footlong Season campaign objectives and the ideas for the commercial, I decided the timing was right to have some fun and enjoy some sandwiches,” said Coach Bill Belichick.

To kick off Footlong Season, Subway is launching its fan-favorite Buy 2 Footlongs, Get 1 Free* Deal, which can be redeemed online, through the Subway App, or in-restaurant. Later this year, Subway will debut new flavor news inspired by game day staples. Fans will want to stay tuned for special merchandise, contests and other exclusive offers featuring the Footlong Season roster in the coming months.

Subway’s push includes on-air and cross-channel integrations with the NFL’s Official Broadcast Partners spanning Thursday through Monday that will be amplified across social and digital platforms.

With a menu of delicious footlongs and new sandwiches set to be released in the coming months, fans can enjoy a quick and convenient meal that withstands the commute from restaurant to recliner for a major game day win.

The Subway restaurant chain continues to evolve the dining experience, offering guests in more than 100 countries quality ingredients, as well as robust flavor combinations while serving over 6 million made-to-order sandwiches created each day. All Subway restaurants are owned and operated by more than 20,000 Franchise Owners, who employ many people in their communities. The Subway experience is also delivered online at Subway.com, through Subway.com/Delivers, and the Subway® App.