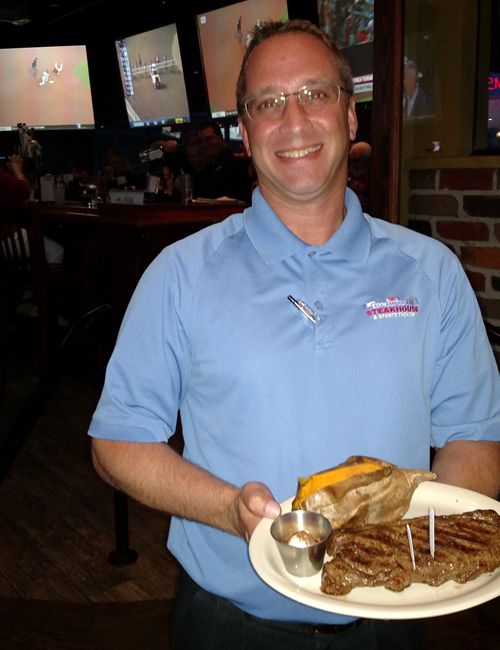 Having worked in the restaurant industry since he was 14 years old, 45-year-old Tony Boyden might just have the restaurant business in his blood.  The Frederick, MD resident did such a great job overseeing the 7,600 square foot All American Steakhouse & Sports Theater at 3515 E. Joppa Road in Parkville, Maryland, that he was handpicked by the company’s owners, Brock Anderson and George Jones, to buy the franchise.

To help Boyden get started, Anderson and Jones agreed to finance 85% of the purchase price.  Mr. Boyden was able to raise the capital for the down payment, as well as fund the $38,000 franchise fee.  Both Anderson and Jones were confident that this was a “win-win” for both Boyden and their newly formed franchise company.

Now they had their first franchise, with a top-notch operator, as well as giving Mr. Boyden a chance to live his long desired dream of owning his own restaurant.  From day one of Tony taking possession of the restaurant, he immediately went to task to make sure he personally greeted every guest who entered the premises.  In addition, Tony raised the bar with new expectations for his entire crew and how he expected things to run now that they had a full-time owner running operations.  Tony’s message was clear; they were going to build sales by taking the approach of blowing away one guest at a time.  He and partner Bill England finalized their purchase on June 2.

The restaurant has operated at that location since 2004 and Boyden has managed it for the last three and a half months.   For the month of June, July, and August, Boyden’s operation scored the highest of all the steakhouses on their secret shopper reports.  In fact, he set the bar so high by averaging 99% for three straight months, that he has proven that when you have “skin” in the deal, you tend to make sure all aspects of your business are running on all cylinders at all time.

“All the time I worked for the company I loved the concept; family friendly atmosphere with reasonable prices,” Boyden says, noting that the company’s unique pairing of sports entertainment with quality, reasonably priced food is particularly competitive.  “Our in-house butcher cuts our wet aged steaks and dry ages them making for a great meal and then there is the sports theater with twelve giant H.D. television screens, a great opportunity for any sports event,” says Boyden.

Patrons and community applaud the new ownership of the restaurant.  “I am hearing from our customers that the quality of food and service has improved,” Boyden says, adding that ownership has helped him step up and motivate all performances by staff who saw where he landed.

Ownership fits like a glove for Boyden, who is already thinking of buying another, down the road of course.  “I would love to open another one in Lancaster, PA which is my home town, but that would not likely happen for another six or seven years.”

Boyden’s rise in the restaurant chain is at least a little reminiscent of the company’s very beginnings. All American Steakhouse & Sports Theater founders, George Jones and Brock Anderson similarly came from early and humble restaurant careers.  Jones rose from short order cook during college years, to a managing partner for Outback Steakhouse and Anderson first helped his parents with their restaurant at the very early age of four. As young men, both rose through restaurant chains till founding All American Steakhouse & Sports Theater in 2003 when they opened their first restaurant in Edgewater, MD.

A believer in community service, Boyden participates in the local Scouts and works with several Briar Woods & Broad Run high schools local high school football teams.  “I am a firm believer in working with community and am trying to expand my involvement.”

The decision to offer Mr. Boyden an opportunity of a lifetime, to own his own restaurant, with a ten-year proven track record, with 85% owner financing, in a concept that he was already very successful as a General Manager, was a “no-brainer” for Anderson and Jones.  Tony always ran his restaurant as if he owned it, Jones said. He was always concerned about building sales and controlling his costs.  He required very little supervision, and had natural leadership qualities, which created an environment in his store where all staff and managers were respectful and acted professional.  Tony’s entire tenure at his Parkville he did not turnover a single manager. Both Anderson and Jones agree that Mr. Boyden was a great fit to be their first franchisee.

Anderson and Jones feel the deal with Boyden was a “win-win”, will be a huge success, and sends a powerful message to their entire workforce; that they believe in promoting from within.

But ultimately both Anderson and Jones are looking for restaurant operating groups that will be interested in multi-unit agreements with at least a three store minimum. “We want great operators who have restaurant experience, financial stability, and most of all, a passion about the concept,” said Jones. “Our goal is to have five solid franchisees with at least ten stores open, and several more in the pipeline over the next five years.  By year ten we would like to double that number.”

However, both Anderson and Jones are more committed to having quality franchise groups who are successful and profitable, versus sheer numbers of stores.

About the All American Steakhouse & Sports Theater

The All American Steakhouse & Sports Theater is a family–friendly casual dining steakhouse providing good-old fashioned, friendly service, while serving high-quality food, featuring dry-aged steaks, hand-cut by our in-house butchers, and all of this in a fun, energetic, sports themed atmosphere. They opened their flagship site in November of 2003 in Edgewater, Maryland. Now being run by industry vets George Jones and Brock Anderson, the company is currently expanding via a franchise program. For further info go to:  www.theallamericansteakhouse.com