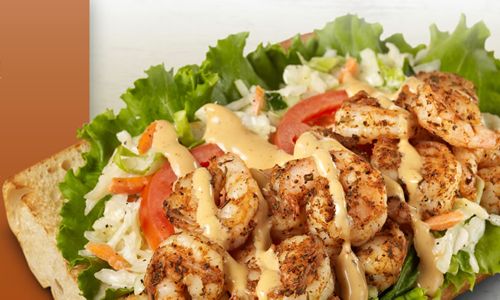 “We want our guests to know that they can still enjoy many of their McAlister’s favorites during Lent,” said McAlister’s Deli President and CEO Frank Paci. “We have made it easy to enjoy delicious options and our popular Cajun Shrimp items are the perfect addition for this season.”  Guests can enjoy the Cajun Shrimp items including a Po Boy, Caesar Wrap and Caesar Salad now through April 20.

In addition to the Cajun Shrimp items, McAlister’s Lent menu options include:

Technomic® recognized McAlister’s as the top kid-friendly fast casual chain in its 2014 Chain Restaurant Consumers’ Choice Awards, and as one of the Top Five Chains Overall in its 2013 “Consumer Restaurant Brand Metrics” Report. FastCasual.com also ranked the brand No. 2 on its “Top 100 Movers and Shakers” list of 2013 and named McAlister’s President and CEO Frank Paci one of the “Top 20 People” in the industry to watch.

Founded in 1989, McAlister’s® Deli is a fast casual restaurant chain known for its sandwiches, spuds, soups, salads, desserts and McAlister’s Famous Sweet Tea™. In addition to dine-in and take-out service, McAlister’s also offers catering with a selection of sandwich trays, box lunches, desserts, a hot spud bar and more. With numerous industry accolades, the McAlister’s brand has more than 320 restaurants in 24 states. The company has corporate offices in both Alpharetta, Ga., and Ridgeland, Miss. For more information, visit www.mcalistersdeli.com.