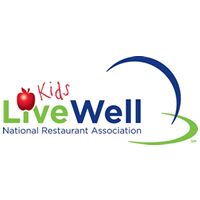 “The Kids LiveWell initiative has achieved remarkable success in its first two years with the program expanding to over 140 participating restaurant brands and into museums, theme parks, and resorts,” said Dawn Sweeney, President and CEO of the National Restaurant Association. “The tremendous response and excitement for Kids LiveWell is evidence of the industry’s commitment to providing healthful meal options for children. We look forward to the continued growth of the program over the next year.”

“It has been an outstanding two years for Kids LiveWell. We applaud the participating restaurants’ commitment and their chefs’ dedication to developing innovative and healthful menu options for children,” said Anita Jones-Mueller, MPH, President and Founder of Healthy Dining. “It is exciting to see the number of Kids LiveWell restaurants featured on HealthyDiningFinder.com continuing to grow, and coupled with genuine enthusiasm from restaurants, parents and kids.”

As part of its two-year anniversary celebration, the National Restaurant Association is showcasing Kids LiveWell at the annual BlogHer convention later this week in Chicago. Joined by participating brands Applebee’s, Arby’s, Chili’s, Denny’s and IHOP, along with Healthy Dining, Association staff will promote the growing selection of healthful kids meals at restaurants nationwide to the 5,000 expected attendees.

Building on the initiative’s positive momentum, the National Restaurant Association has expanded the program by recruiting foodservice suppliers, including Kraft Foods, Kellogg’s and PepsiCo, which offer qualifying products that help create healthful Kids LiveWell meals. Earlier this year, the Association announced that national distributor Sysco would begin offering more than 25 Kids LiveWell meals to restaurants across the country.

Healthy Dining’s team of registered dietitians works with restaurants to identify and validate menu choices that meet the program’s criteria. Participating restaurants and their qualifying items can be found on HealthyDiningFinder.com, and also via a free Kids LiveWell App.

Founded in 1919, the National Restaurant Association is the leading business association for the restaurant industry, which comprises 980,000 restaurant and foodservice outlets and a workforce of more than 13 million employees. We represent the industry in Washington, D.C., and advocate on its behalf. We operate the industry’s largest trade show (NRA Show May 17-20, 2014, in Chicago); leading food safety training and certification program (ServSafe); unique career-building high school program (the NRAEF’s ProStart); as well as the Kids LiveWell program promoting healthful kids’ menu options. For more information, visit www.restaurant.org and find us on Twitter @WeRRestaurants, Facebook and YouTube.