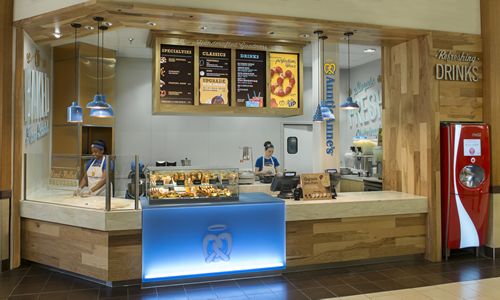 Lancaster, PA  (RestaurantNews.com)  Auntie Anne’s Pretzels, the 1,540-unit franchise made famous by its freshly baked, hand-rolled snacks, is announcing the release of a new store prototype that will incorporate the look and feel of a home kitchen with warmer tones, prominent brand messaging and enhanced equipment.

New design elements at Auntie Anne’s locations will include warm wood tones on the storefronts, blue pendant lighting with a copper inner accent, a modern display case, copper ovens, a blue-colored mixer and additional brand messaging integrated into the décor. While all new locations will feature the new design, the prototype will be tested at Park City Center in Lancaster, Pennsylvania before it is rolled-out to the franchise system for gradual remodeling.

“We are very proud of the new look and pleased that it has received a positive reception from franchise partners, landlords and suppliers. Through this test, we are making sure all the elements work together as planned and the update is cost efficient.  Although the look is new, we stayed true to our brand messaging and rich company history of freshly baking pretzel products from scratch all day long,” said Bill Dunn President and Chief Operating Officer at Auntie Anne’s. “In combination with our freshly-baked products and this new store design, as well as excellent customer service and sampling, our goal is to drive franchise partner profitability.”

The Park City Center location receiving the makeover is Auntie Anne’s original mall location, opened by company founder Anne Beiler in 1991. Beiler moved to the mall location when she sought expansion from her primary presence in farmers markets, including the original store at the Downingtown Farmer’s Market.

The leap into the local mall proved to be no easy task. The Park City mall’s leasing representative, Monte Senko, was not initially impressed with Beiler’s pretzel and lemonade stand, thinking it would be never successful in a mall setting and she would be unable to pay her rent. Senko finally agreed to month-to-month lease in the corner of the food court. As we all know, Senko was wrong. He too realized this and became instrumental to growing the brand as one of the chain’s first franchise partners in the southeast region of the United States.

Pretzel lovers can find locations in malls, outlet centers, colleges and universities, transportation sites, military bases and other non-traditional shopping and entertainment centers in 48 states and more than 30 countries.

An award-winning franchise system that is owned by FOCUS Brands Inc., Auntie Anne’s® Pretzels received the 2014 Technomic’s Chain Restaurant Consumers’ Choice Award for craveability, ranked number one in the category of hand-rolled soft pretzels by Entrepreneur Magazine’s Franchise 500, and was granted the World-Class Franchise® honor (the most prestigious award in franchising) for the past seven years. For more information about the Auntie Anne’s franchise opportunity, visit www.auntieannes.com, www.facebook.com/auntieannespretzels, www.twitter.com/auntieannes or www.youtube.com/auntieannespretzels.