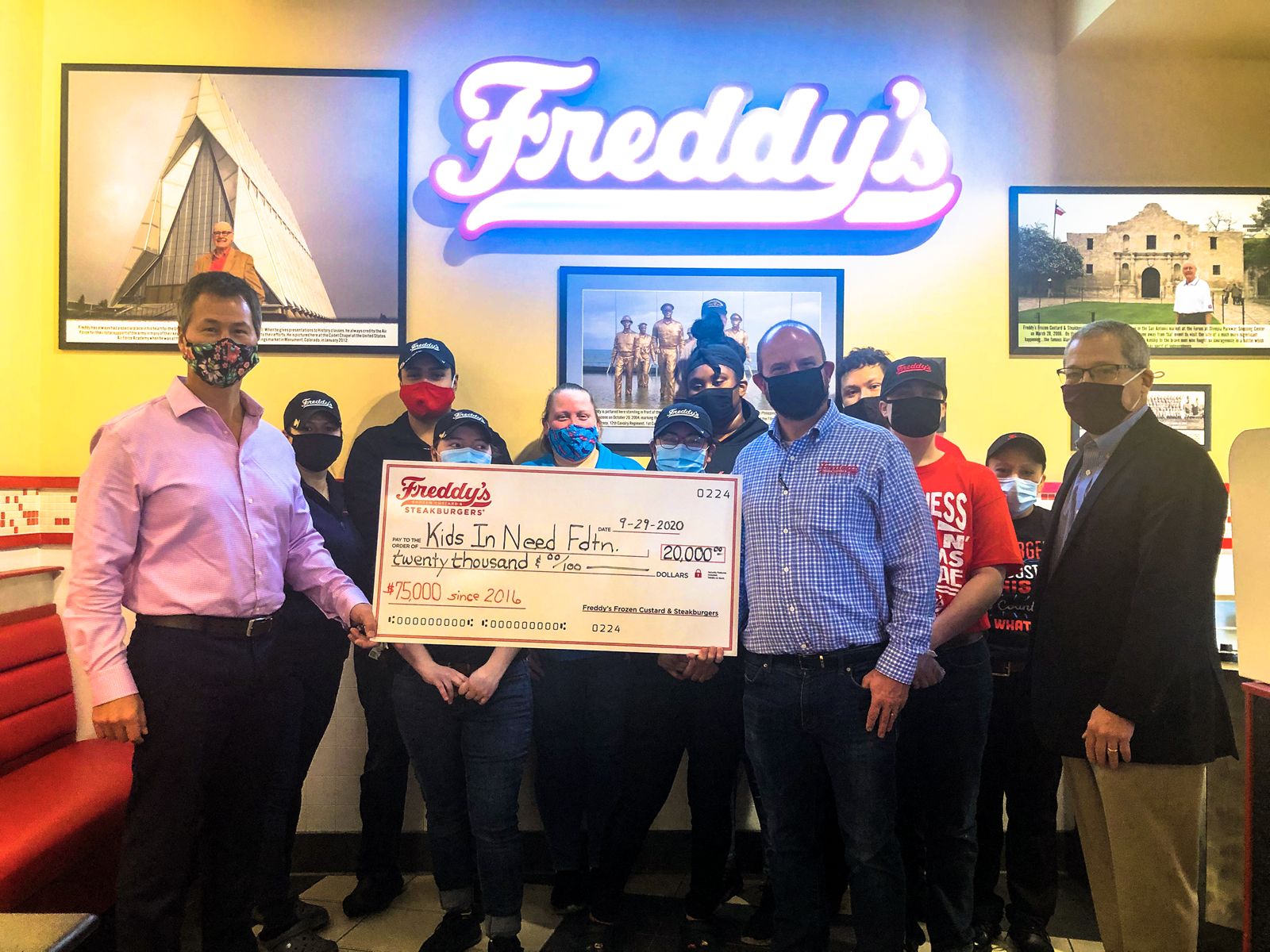 Wichita, KS  (RestaurantNews.com)  Fast-casual restaurant concept Freddy’s Frozen Custard & Steakburgers® announced today that it donated $20,000 to the Kids In Need Foundation through its annual National Frozen Custard Day promotion in August. Since 2016, Freddy’s has donated $75,000 to the organization, a national non-profit organization that partners with teachers and students in underserved schools to provide the resources needed for teachers to teach and learners to learn.

“Year after year, Freddy’s has shown incredible commitment to students and teachers across the country,” said Corey Gordon, CEO of Kids In Need Foundation. “The support from both Freddy’s and its guests inspires learning across the country and we look forward to continuing to collaborate in the future.”

Founded in 1995, the Kids In Need Foundation believes that every child in America should have equal opportunity and access to a quality education. Its mission is to ensure that every child is prepared to learn by providing free school supplies to classrooms nationwide, with a focus on schools with 70% or more of the student population participating in the National School Lunch Program (NSLP).  To date, the foundation has distributed over $1 Billion in school supplies, and supported 5 million students and 200,000 teachers in 2019.

This donation follows a successful National Frozen Custard Day promotion held on August 8. Participating Freddy’s locations offered a $1 discount on all custard menu items throughout the day and supported the foundation with a donation. On September 29, 2020, Freddy’s Director of Franchise Support Mike Mann presented the check to the Kids In Need Foundation at the Rogers, MN Freddy’s location.

“This year’s success has been really uplifting for everyone involved, given the obstacles that we’ve all faced over the last few months,” said Randy Simon, co-founder and CEO for Freddy’s Frozen Custard & Steakburgers. “We’re inspired every day by the mission of Kids In Need Foundation and are honored to be able to help in this way. Students and teachers across the country are adapting to a new normal this year and we are proud to support their academic pursuits through this partnership.”

Frozen custard is churned throughout the day, every day in each Freddy’s restaurant to produce the high-quality, fresh custard treats that made the restaurant famous in 32 states. The brand plans to open more than 30 restaurants nationwide throughout 2020. Franchise opportunities remain in areas across the U.S., including the Northeast, Upper Midwest, California, and large metro areas such as Pittsburgh and many of its surrounding markets. For more information about development opportunities, contact Markus Scholler, Senior Vice President of Franchise Development, at 316-719-7850, or visit www.freddysusa.com/franchising.

Co-founded in 2002 by Scott Redler and Bill, Randy and Freddy Simon, Freddy’s opened its first location in Wichita, Kansas, offering a unique combination of cooked-to-order steakburgers seasoned with Freddy’s Famous Steakburger & Fry Seasoning®, Vienna® Beef hot dogs, shoestring fries paired with Freddy’s Famous Fry Sauce® and frozen custard that is freshly churned throughout the day. Today, Freddy’s has grown to more than 375 locations that serve 32 states across the nation from California to Pennsylvania, Virginia, down the East Coast states to Florida. Freddy’s has been named No. 1 on Forbes Best Franchises to Buy, QSR Magazine’s 2019 Best Franchise Deals, Entrepreneur’s 2020 Franchise 500 top 100, Franchise Times magazine’s 2020 Fast & Serious top 40 and many other nationwide and local industry awards. For more on Freddy’s, visit the Newsroom and follow us on Facebook, Twitter and Instagram for the latest news.

About The Kids In Need Foundation

The Kids In Need Foundation provides the support and tools needed for teachers to teach and learners to learn as a quality education is the best gateway to opportunity, and students cannot achieve their full potential without it. With a focus on supporting schools most in need nationwide, Kids In Need Foundation believes that every child in America should have equal opportunity and access to a quality education. Founded in 1995, Kids In Need Foundation, a national 501(c)(3) charitable organization, has distributed $1 billion in school supplies since its inception. For more information, visit KINF.org, and join us on Facebook, Twitter, & Instagram: @KidsInNeed.